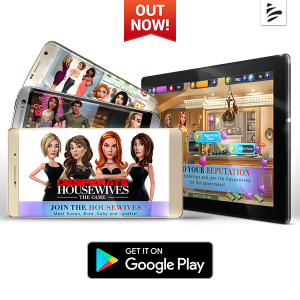 ABC and MegaZebra have released the highly anticipated Android version of Desperate Housewives: The Game!

MegaZebra is excited to bring Desperate Housewives: The Game to Android. When released on iOS earlier this summer, the game became an instant hit in the vibrant fan community and it was reviewed by popular YouTubers such as NickDominates (115K views) and KPopp (100K views). As of today, Android users will also be able to enjoy one of the most innovative life-simulation games in the market.

The original iPhone version of Desperate Housewives: The Game was featured in the Apple Store in over 100 countries with an average rating of 4.5 stars:

This has all the charm of my beloved series! I was astounded after ending in 2012 that they would add such a nice game for fans. I would highly recommend this game to anyone (not just people who have seen the show) who loves a good mystery game. Definitely would give this an A+, the developers put a lot of time and detail into it – how a game should be! Now I hope they keep updating it with new content on a daily basis. Thank you for this awesome game ❤️”

“Game of the year!!!! by Murasaki the Greatest

I am sooooooooooooooo happy this game has been released. It’s soo good. Interiors are to die for, and what a bunch of stylish clothing items to choose between. I could not have asked for more. Thanks for developing such a marvellous gem. Looking forward to unravel the mysteries in Wisteria Lane. Superb!”

With the release of the Android version, the game will not only be playable by a much larger audience, but it will also contain some brand-new updates. So far, already 8 episodes have been released of the first season and new exciting features are in the pipeline.

You can find the game here: http://bit.ly/DownloadNow_DH