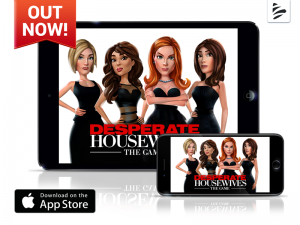 ABC and MegaZebra are proud to present a dramatic new prequel to the hit TV-series: Desperate Housewives: The Game!

Desperate Housewives: The Game is a life-simulation game based on the highly popular TV-series. Players step into the role of a new resident, who is a popular advice columnist. They grew up on Wisteria Lane and are excited to be returning to live there as an adult. But on the day the player returns, her life is turned upside down when her dad suddenly disappears. It becomes apparent there’s a dark mystery connected to her father.

By building friendships with the Housewives and other residents on Wisteria Lane, the player explores her father’s past, to uncover the secret that is disrupting the idyllic life of wealthy suburbia. However, some residents, determined to keep their own secrets concealed, will hamper the player’s investigations.

But it won’t just be about drama and mystery! The player will have to keep up with the high standards of Wisteria Lane. By decorating her house with stylish furniture, she can make it the (secret) envy of the other Housewives. The player can also show off her unique dressing style, which may catch the eye of someone very special!

Desperate Housewives: The Game is available on iOS devices. An Android version will be available soon.

You can find the game here: http://bit.ly/PlayNow_DHthegame